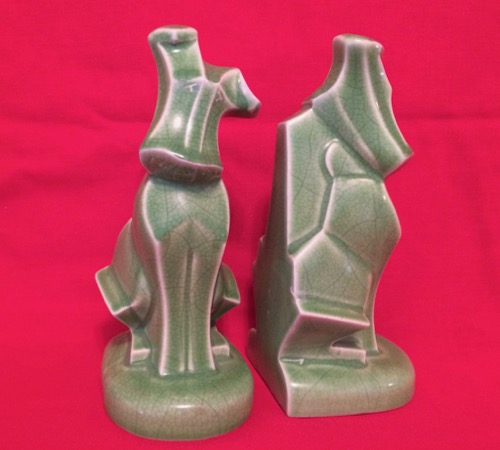 Geometric themes were popular In the United States during the 1930’s Art Deco period. Bookend animals were sometimes abstracted with flattened surfaces and sharp angles.  These green ceramic dogs with a crackle glaze show such flat surfaces and the angularity is heightened by whitening the sharpened edges.  It is our assumption that these intriguing Scotties were made in the thirties. However, we have not been able to confirm anything about these bookends.  We do not know the pottery that produced them or the name of the artist.  Each dog bears a small impressed mark on the bottom so identifying the dogs should be easy, but we cannot identify the mark. The bookends are large, heavy and attractive but baffling. 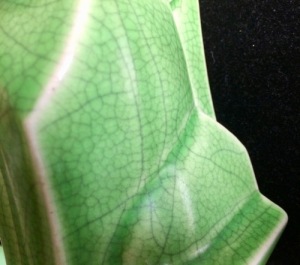 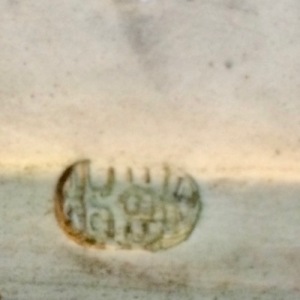 We have spent quite a bit of time trying to unravel the mystery Maker’s Mark – to no avail. We were guessing that it was either Japanese or Chinese. However, a cat fancier and collector, who goes by the moniker, Kait-Kat, contacted The Bookend Collector regarding her geometric Cat bookends. The photos of her Cat bookends are remarkably similar to our Geometric Dogs. The Maker’s Mark, “Made In Japan”, on her bookends is quite clear and most probably dates from the 1930’s. 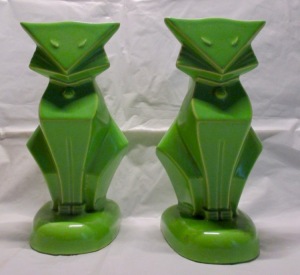 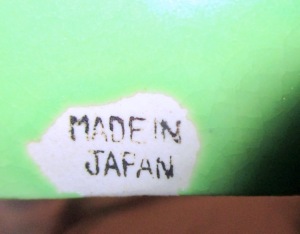 MAGNIFICENT CATS: THE LION AND THE TIGER BOOKENDS

Just the type of bookends to hold up your adventure tomes.  Are you a collector of Edgar Rice Burroughs’ “Tarzan”, or Roosevelt’s “African Game Trails”, Kipling’s “The Jungle Book” or Dinesen’s “Out of Africa”?  If so, these are the bookends for you.  Big, beautifully sculpted African Lion and Asian Tiger stealthily menacing as they step from the jungle overgrowth. 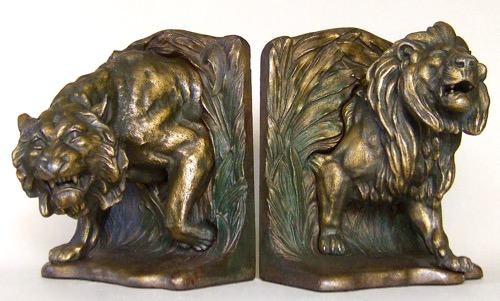 One bookend shows an African lion stepping forward from a jungle and the other bookend shows an Asian tiger stepping forward from a jungle.The bookends are admirable as sculpture, but perhaps even more admirable because they are massive – 17 pounds per pair.  A photo does not do justice to the power exhibited by these bookends. 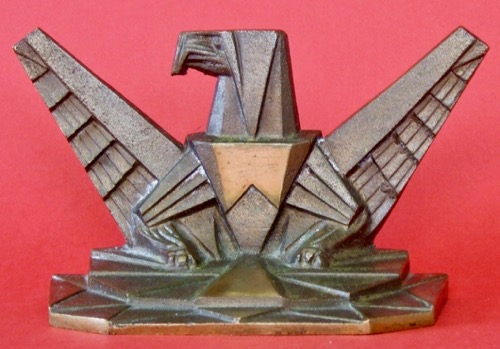 Not all geometric objects were were zigzag.  Some were composed of curving geometric figures, like the bookends shown here entitled Rings and Balls, made up in this instance almost entirely of spheres and circular rings. 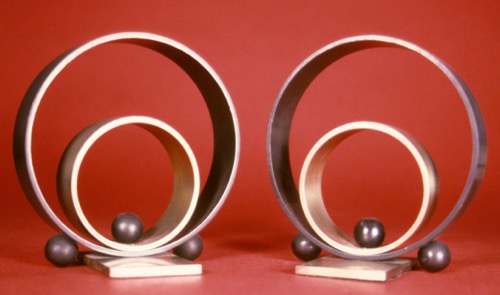 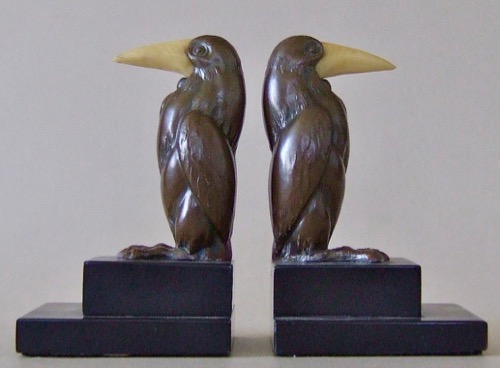 We were browsing in an antique shop in 1993 and we saw these bookends.  We bought them for $40. for the house, and later realized that we knew nothing about them – not who made them or when, and we could not identify how they were made, the materials of construction, or the art form. They were our mystery birds. We searched for a book and found there were no books or articles on bookends.  This inspired us to do research and write a book, categorizing bookends by era and we obtained a contract to do so from Schiffer Publishing.

We had a problem because Schiffer wanted at least 400 illustrations and we had only amassed about 250 pairs.  Fortunately, we became friendly with Louis Kuritsky.  He had a large collection and agreed to provide us pictures if we listed him as an author. which we did. BOOKEND REVUE was published in 1996, which, by the way, made bookends into collectibles. We followed it  with BOOKENDS: OBJECTS OF ART AND FASHION in 2012.  We always remember, though, that Mystery Birds was responsible for our odyssey into bookends. 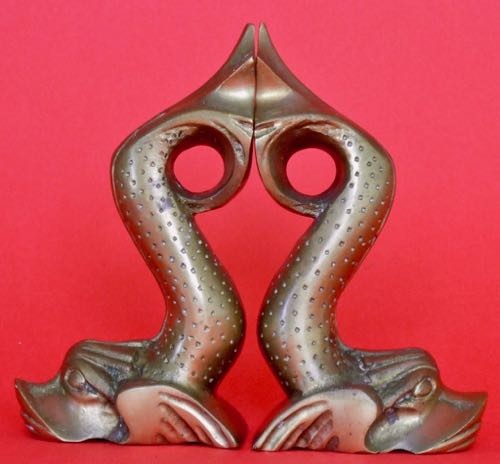 Malta is an archipelago of three small islands in the Mediterranean Sea near Sicily and Italy.  The first people reached Malta in about 5000 BCE and it has experienced a rich history of foreign invasions ever since.  The Order of the Knights Hospitallers of St. John arrived on Malta in 1530 and ruled for  about 300 years.  The Knights were  a Roman Catholic chivalric and military order who adopted the emblem we know as the Maltese Cross in 1126, and which is now associated with the nation of Malta. The Sovereign Military and Hospitaller Order of St. John of Jerusalem of Rhodes and of Malta now has it’s world headquarters in Rome. Malta became part of the British Empire in the early 1800s, and due to the romance of its location, climate, history and culture was a favorite stop-over for wealthy Europeans doing the Grand Tour in the 18th and 19th centuries.

Dolphin door handles and door knockers are an ancient decorative feature on Malta buildings. Much admired by the tourists and ex-patriates that visited Malta; replicas showed up in England as early as mid-1800s. For example, In an 1869 English publication called NOTES AND QUERIES, some one asked the following: “DOLPHIN KNOCKERS…….Perhaps the Marquis of Bath can account for one of the sets of dolphin knockers from Dean Street, Fetter Lane. A pair certainly figure prominently on the door of his home in Berkeley Square.”  A footnote on that same page noted, “We have reason to believe that Lord Bath’s knockers were modelled from examples at Malta.” 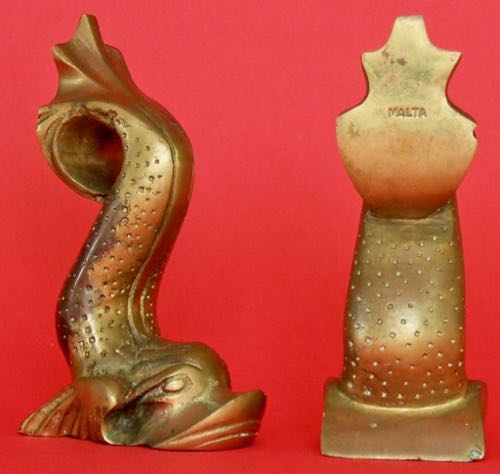 Brass Dolphin Bookends from Malta with Maker’s Mark. The popularity of the Malta Dolphin as a reminder of a pleasant sojourn has inspired the 20th century production of brass dolphin door knockers and bookends by the foundries on Malta. 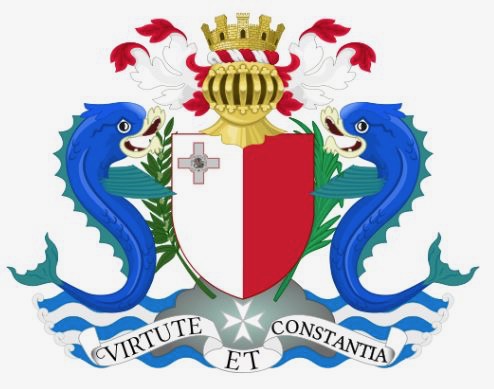 National Arms of Malta, from Independence in 1964 until 1975. The two dolphins indicated that Malta is an island state. Image and information from Heraldry of the World.

In 1895 Elbert Hubbard founded the artistic community of Roycroft in the upper New York state village of East Aurora.  Mr. Hubbard established a print shop in East Aurora after a visit to William Morris and the Kelmscott Press. The success of the print shop and its publications, which defined a burgeoning interest in what is known as the Arts and Crafts Movement, led to the establishment of shops – a bindery, leather shop, metal working shop and furniture shop. Click this link for an excellent summary, The Roycroft Community, by Hilary Davis on The Arts & Crafts Society website.

Roycroft became a collection of workshops dedicated to producing household items according to the principles of the budding Arts and Crafts Movement.  Accordingly, bookends were designed and fashioned by artists working by hand.  Most of the bookends were made in an L shape from sheet copper, and these are the design of Roycroft and other metal workshop bookends from that era that we generally see today.

Most of these early bookends were decorated in low relief, or not decorated at all, but relied on their exposed construction for decorative appeal.  The bookends shown here exhibit curled corners, hammered surface, and exposed rivets that fasten the upright to the base. In addition,  we see an engraved owl against  a background of fine stipples in the metal.  Collectors appreciate the handwork even though the bookends do not stand out at a distance.

Legend:Roycroft early mark.  Roycroft used four marks.  The earliest mark was used from about 1909  through about 1920.  Later marks can be seen in our 2013 book, BOOKENDS, Objects of Art and Fashion. 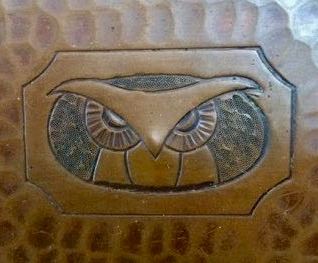 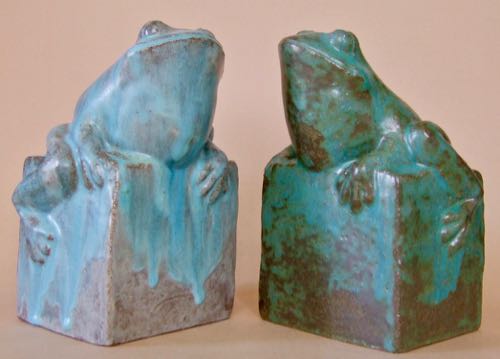 Frogs have been frequent subjects for bookends since early times, probably because they are grotesque and interesting creatures.  These pottery frogs are not very remarkable, but they are big so we will call them bullfrogs.

Posted by Bookend Collector on May 12, 2017 in Animals, Art Styles, Ceramic/Tile