Feminism was very topical in the nineteen twenties.  Young ladies wanted the free and easy lifestyle of men, including smoking, gambling, drinking and sexual contacts.  In order to look more like men they deemphasized breasts and cut their hair short.  Today we remember these young ladies as flappers: The origin of the term is uncertain, however, click here for a Geneva (New York) Historical Society blog post from 2013 with a pretty thorough summary of the etymology.

Issued in the nineteen twenties, these bookend nudes show us the short feminist haircut of the era, called “the bob,” so we know she was a flapper. 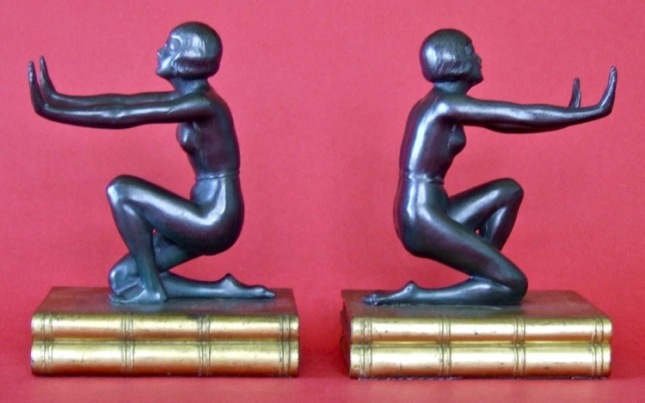 Posted by Bookend Collector on May 11, 2019 in Art Deco, Art Styles

Sitting Ladies: Grey metal, Height 7 inches, Inscription: Janle and Made in France. circa 1925.  Janle is suspected to be a pseudonym for Max Le Verrier.

These Art deco bookends are large, well-cast and beautiful, and would be desirable with no further provenance.  But, in addition, they are signed by the french artist Janle and were cast by the prominent french foundry of Le Verrier, all of which makes them high-end productions.

Impressed “Janle” inscription and “Made In France”.

McClelland Barclay (1891-1943) was one of the best known and successful American artists of the first half of the twentieth century.  Born in St. Louis, he was a student of H.C. Ives, George Bridgman and Thomas Fogarty.  Barclay was a painter, an illustrator, a sculptor and a jewelry designer. His illustrations appeared on the covers of many national magazines, as well as on Naval posters for the first and second World Wars. His McClelland Barclay Art Company (1930s) produced numerous small household items, including, of course, bookends.  Barclay died in action as a naval officer in the second World War, but his art lives on.  Online exhibits of his art can be viewed at The Naval History and Heritage Command, Navy Yard, Washington DC and National Museum of American Illustration, Newport RI.

Sisyphus.  Grey metal. Height 6.5 inches.  Sisyphus, the king of ancient Corinth, commited a crime against the Gods and so was forced to repeatedly push a heavy boulder up a steep hill and then watch it roll down again, forever.   The legend of Sisyphus is inscribed on the back of each bookend.

Reverse of Sisyphus Bookends with Legend.

Barclay bookends feature a variety of subjects – nudes, toadstools, fish, the Greek god Pan, Ivy leaves, bears, horseheads, a number of dogs, and others.  Some were produced by Barclay’s art company and some by other foundries.  “Buddy, The Original Seeing Eye Dog” is one that is seen frequently.  It was originally produced by McClelland Barclay, probably in response to Buddy’s death in 1938,  in a large version (8.5 inches) and in a smaller version (7 inches). The Seeing Eye Dog Foundation in New Jersey has both versions in their collection.   Later, the Dodge Company produced copies that do not have the McClelland Barclay signature. 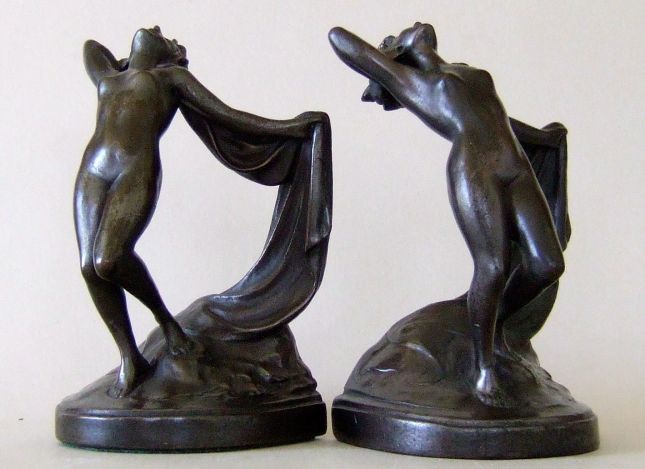 Important social changes took place in America in the first two decades of the twentieth century.  The Arts and Crafts movement was established and it is still with us today.   The Women’s Liberation movement  became powerful and Women achieved the vote in 1920, due to the activities of the Suffragetes.  Victorian habits were rapidly fading during these decades, and few remained by1920.  Bustles were gone by 1900, and punishing corsets that produced an hourglass figure were gone by 1912.  Admiration for women’s bodies became acceptable and bookends joined this latter fashion.  Bookends now began to show unabashed nudity to go with the times.  Nudes no longer needed to appear divorced from sex.  Newly liberated woman bookends show a woman reveling in her beautiful natural body.  The flapper era which peaked in the mid-1920s. was about to appear, and bookends would show flappers as they evolved.

This lady is proud of her body.  She is not a flapper because her hair is too long and her breasts are too large.  She must date from about 1920 or from the thirties.

Ruebensesque Bookends. Gray metal.  Height 7 inches.  The base looks like marble but is apparently soapstone.  Unmarked. Circa 1920. Usually attributed to Ronson but the soapstone base and globular footing are suggestive of the Hirsch Foundry.

Het Pelsken (Portrait of Helene Fourment), Peter Paul Ruebens young wife, ca. 1638. Located in the Kunsthistorisches Museum, Vienna, Austria. If she drew back her cape she would probably look like the bookends.

During the sixteenth and seventeenth centuries, and probably before then as well, heavier women were more appreciated than the slender fashion models we admire today.  Each of these bookends shows a softly-rounded lady wearing a cape and we guess she would have been very popular a few hundred years ago, and if she were even heavier she would have been even more desirable.  This lady must be from just before the nineteen twenties flapper era when the boyish figures of the flapper took over.

The lady on this bookend is reminiscent of the paintings of Peter Paul Rubens. In 1630 Rubens, in his fifties, remarried  after the death of his first wife. His second wife, Helene, a voluptuous 16 year old, became the inspiration for a number of his female figures. Click here to view The Three Graces displayed at the Prado Museum.

Ronson bookends featuring these female sculptures with a different base can be found in BOOKEND REVUE, figure 357, page 97 and in BOOKENDS: Objects of Art and Design, figure 280, page 120.  Another Ronson example can be found at Chuck DaCostas Antique Bookend Collection website.  He has labeled his example, “Woman in Flight.”

In Victorian  and Edwardian England, the upper classes made a lifestyle of mistresses, adultery, and free sexual behavior. The English nation, however, otherwise promoted domesticity, fidelity in marriage, and chastity.  Nude female figurines were not acceptable.  Americans picked up some of these traits.  These are American bookends, circa 1916; a nude man and a nude woman.   The woman appears to shield her face in embarrassment. Their nudity is not sexually suggestive. The bookends tell us that by their title:  Classic Art, cast in the metal.

Title of Galvano Bronze Nude Bookend Pair on reverse side.

The nudity is attributed to classic Grecian sculpture and is, therefore, quite innocent.  These bookends tell us that Victorian prudery was still fashionable in the United States in the early twentieth century. Nudity was admirable, but only when divorced from sexual connotation.

Frankart Inc. was a New York City foundry established by the artist, Arthur von Frankenberg, in the early nineteen twenties.  Frankart Inc. produced bookends, ashtrays, lamps, and other metal household accessories.  Many of the items featured streamlined, sylph-like female nudes designed by von Frankenberg which were very well received, possibly because they contrasted with classical Victorian nudes and were compatible with the emerging boyish  figures of the flapper girls.  The success of Frankart items has continued to the present day, and Frankart bookends are collected today by lovers of Art Deco.

One of the earliest pairs of Frankart bookends are popularly known as Nude and Frog. The Nude and Frog bookends are transitional between Victorian and Art Deco styles. Each bookend presents a sylph-like nude standing on one leg and shying away from a frog nearby.  The inclusion of the frog is a bow to the passing Victorian style which was overlapping with Art Deco at this time.  The frog is a Victorian element which makes the female a  creature of nature rather than a sexual object. Victorian nudes were often presented as nymphs or Classical Greek or Roman personages in order to avoid sexual connotation. Art Deco elements in these original bookends include a streamlined female and geometric buttressing.

The woman that posed for these bookends was Leone Osborne, a celebrated  model of the day.

The nude in the original foundry pair is stabilized with Art Deco geometric buttressing against the supporting foot and ankle and is marked Copyright 1922 and Frankart Inc.  These original pairs are rare. Gray metal, height 11.25 inches Inscription:  Copyright 1922, Frankart Inc.

Later Frankart productions are unabashedly Art Deco, as can be seen in the bookends presented on the Decollector website.
There are many Nude and Frog pairs without the geometric buttressing around the nude’s foot and marked only with the 1922 date.  These are later Frankart issues, such as the one in the 1930-31 catalog are listed as Frog. There are also unauthorized reproductions.   Serious collectors obviously prefer the originals.

For contrast with the transitional Frankart pose, the bookends below show a female nude in Victorian style.  She is certainly not an object of prurience, but is rather a creature of the forest and she plays with animals, such as this orange frog, and does not traffic with men.

Posted by Bookend Collector on May 19, 2014 in Art Deco, Victorian